To share your memory on the wall of Sandra Leap, sign in using one of the following options:

Provide comfort for the family by sending flowers or planting a tree in memory of Sandra Leap.

Memorial contributions may be made to the Family Worship Center in Carrollton, Kentucky. Cards are available at the funeral home or online at www.haskellandmorrison.com

To send flowers to the family or plant a tree in memory of Sandra Sue "Tootie" Leap (Reed), please visit our Heartfelt Sympathies Store.
Read Less

Donations are being accepted for: Family Worship Center.

We encourage you to share any memorable photos or stories about Sandra. All tributes placed on and purchased through this memorial website will remain on in perpetuity for generations.

Flowers were purchased for the family of Sandra Leap.
Order Now | Show All
Comment | Share Posted Apr 04, 2019 at 08:11pm via Floral Arrangements
GM

We are so sorry for your loss. And our thoughts go out to you and your family. 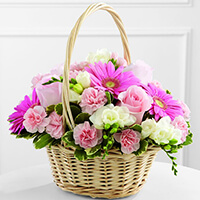 So very sorry for your loss. Death is hard to cope with. One way God comforts those who mourn is through his word, the Bible. Examining what the Bible teaches about the true condition of those who have died and the hope of the resurrection can bring you comfort too. Ecclesiastes 9:5 and Acts 24:15. The Bible gives us hope.
Comment | Share Posted Apr 02, 2019 at 06:29pm via Condolence
JS

I miss this wonderful lady and I feel sorry for her family. She was one of the the greatest people alive, I knew her since I was 10 months old. She is in a better place now and will live in our hearts forever.
Comment | Share Posted Mar 30, 2019 at 10:01pm via Condolence
P

one of our first friends here in switzerland co. when we came 25 yrs ago.. such a sweet soul and going to be so missed by so many.. blessings to the family and friends of a wonderful lady..
Comment | Share Posted Mar 30, 2019 at 06:50pm via Condolence