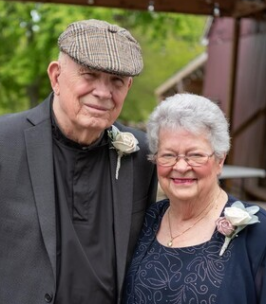 Mr. William Ross "Bill" Hord, age 88, of Madison, Indiana, entered this life on February 8, 1934 in Deputy, Indiana. He was the loving son of the late Ralph Emerson and Mabel D. (Kinnett) Hord. Bill was raised in Jefferson County, Indiana and was a 1952 graduate of Madison High School. In 1956, Bill met the love of his life Peggy Ann Ralston, who he lovingly referred to as Ann. Bill was inducted into the United States Army on June 5, 1956 in Louisville, Kentucky. He received the Marksman Rifle Badge, Sharpshooter Carbine Badge and the Good Conduct Medal. He served overseas in Germany for one year, two months and seven days. He was transferred to the United States Army Reserves on May 16, 1958 at Fort Sheridan, Illinois with the rank of Private First Class. Bill was honorably discharged on August 1, 1961 with the rank of Sergeant. On June 18, 1958, Bill was united in marriage to Peggy Ann Ralston at the Brushy Fork Baptist Church in Switzerland County, Indiana. This happy union of over 64 years was blessed with three daughters, Lynn, Luann and Carol. On December 27, 1954, Bill was employed in instrument maintenance for Indiana Kentucky Electric in Madison, Indiana, retiring on July 1, 1995 after nearly 41 years of service. Bill and Peggy along with their grandchildren mowed yards for their elderly neighbors from 1995 - 2012. He was a member of the Ryker's Ridge Baptist Church in Madison, Indiana. Bill was very involved with running the sound system at church, building the new sanctuary and education wing, as well as, renovations to the old sanctuary. Bill was always involved in countless repair projects at the church and was always there to lend a helping hand to those in need. Bill was an avid reader and loved going to the Jefferson County Public Library. He also enjoyed riding his BMW motorcycle, working crossword puzzles, as well as, watching Southwestern girls basketball games, woodworking, carpentry and mowing. He also enjoyed listening to vintage ham radio transmissions from around the world. You could always count on Bill to play a round of golf in his free time and achieved six holes in one over his lifetime of playing golf. In their early years, Bill and Ann loved traveling to Germany, Scotland and Ireland, as well as, mini trips in the Mazda around the United States. Bill passed away and entered the gates of Heaven with his loving family by his side at 10:10 a.m., Tuesday, August 2, 2022, at the Norton King's Daughters' Hospital in Madison, Indiana.

Interment and full military rites will follow in the Ryker's Ridge Cemetery in Madison, Indiana.

Memorial contributions may be made to the Ryker's Ridge Baptist Church. Cards are available at the funeral home and church or online at www.haskellandmorrison.com

All rights reserved. This obituary is also archived at obittree.com